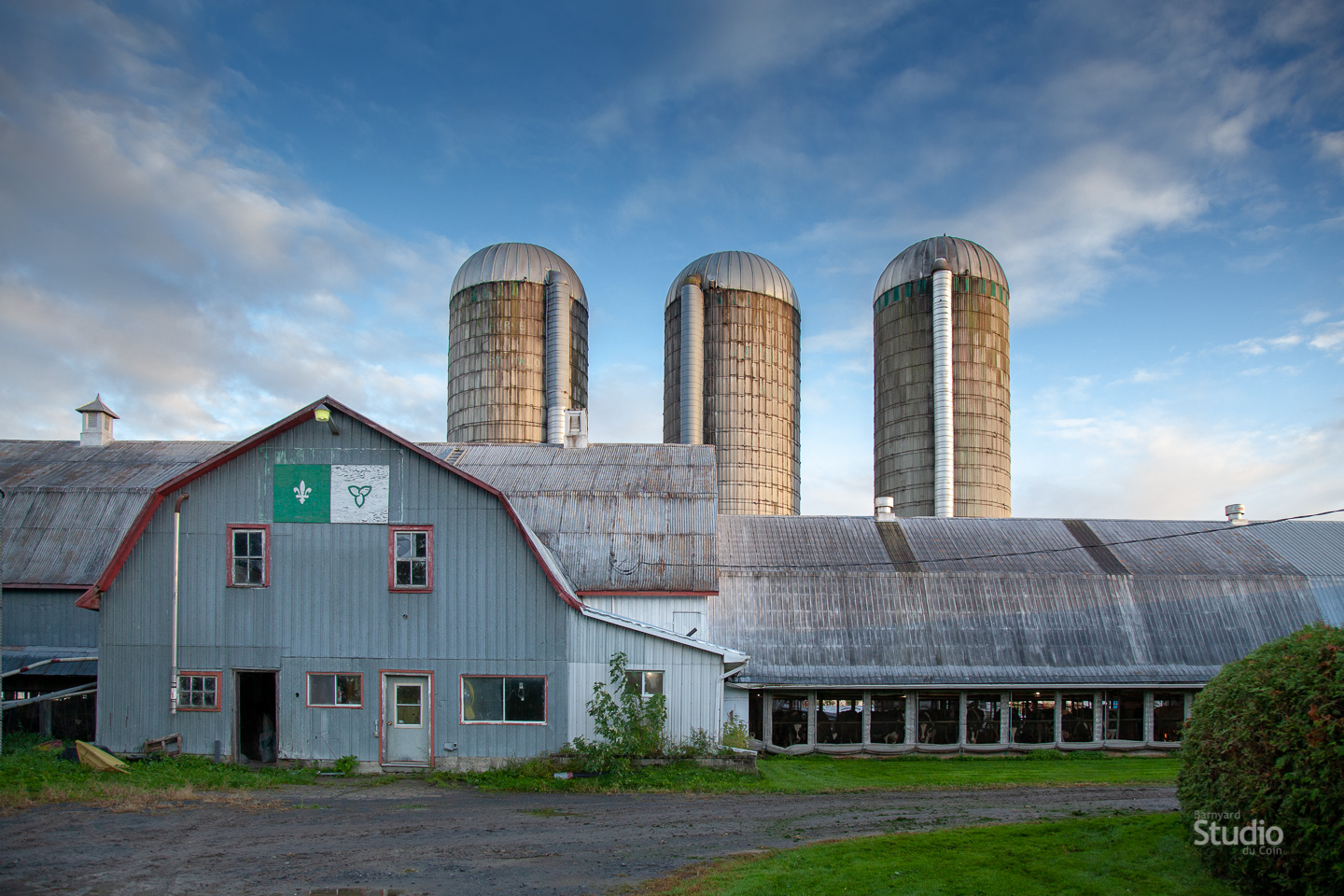 When I grew up in the early 60’s in St. Pascal Baylon, farms were spread out on every backroad. The norm was 100 acres and between 40 to 50 cows. Of course some farmers owned more or rented it.

Regardless of the size, the reality is that back then there were lots of farmers around. I remember many of the families who worked the land: Gauthier, Laviolette, Dion, Guibord, Lalande, Brunet, Séguin, Presley and further away: Desjardins, Maisonneuve, Séguin (Paul & Jean-Rhéal), Lalonde, Pilon (Armand & Gustave), Duquette (Maurice & Roger), Chartrand (Jules & Robert), Ouellette, Paquette, Viau, Parent. I am sure I forgot some.

Coming back in the area some 30 years later, the scenery has greatly changed. Many of the old farms have been sold or rented out. While farms are bigger, there are less farmers. Many of the old barns are now either gone, abandoned or used as storage.

Yet, there are some farms who have survived the years, and younger generations have taken up the challenge of country life. Such is the case of two families whose old barns grace the month of March’s page of our calendar: the Séguin at the South end of Rollin Road near Cobb’s lake and that of the Maisonneuve, on the road of the same name.

Miguel represents the 5th generation of Maisonneuve to work the land and milk cows. His ancestors Pierre and Domithilde, settled in St. Pascal near ‘the Lake’ in 1886. Through the years, the family was brave and showed great initiative to face the many challenges it faced. Arthur had built a holding tank above the barn. His cows never lacked fresh water, brought up using a wind mill.

Miguel’s grandparents, Jean-Marie and Paulette took over from his parents in 1958. The barn then housed 22 dairy cows, milked by hand. The couple worked hard to improve their land and herd. They used artificial insemination early on and drained their land. In 1967, they built an addition to the barn and installed a barn cleaner. Despite all their hard work, they experienced a major set back when in the beginning of the 80’s, the barn burnt down. The animals were saved and they decided to rebuild. Later on another addition provided more space. The new stalls quickly filled with cows, now formed the major part of the building.

During the first 10 years on the farm, Jean-Marie drives 4 times a week to Hawkesbury to deliver milk to his brother’s dairy, who then redistributed in town. At the beginning the milk was kept in large 30 gallons containers who were lowered in the well. In time they were able to use 8 gallons tanks stored in a water cooler. Finally, Jean-Marie once again adapting to his time, bought a ‘bulk tank’ where the milk was kept until the truck picked it up to bring to a local dairy.

Paulette has good memories from their time on the farm although she admits she was often worried for her 5 boys. They liked to play pretending they were Tarzan. They hung a huge cable to the old silo and swung around from side to side.

Since hockey has always been part of the family tradition, the boys often played inside the house with the result we can easily imagine. In spring the kids liked to play on the ice chunks in the nearby creek. Once, a municipal employee came by and asked Mr. Maisonneuve if he knew where his kids where? He had to go rescue them, as one of them was stranded while the others in retaliation for earlier behaviour, refused to help him.

Often the boys left without informing their mom of their whereabouts. She had figured out a way though to find where they were playing. She would go out of the house and call out the dog. The direction he came from indicated where hers sons were.

The Maisonneuve always had a reputation. They loved to joke around and tease. Paulette even had a hard time to find babysitters as most were scared to be the victim of the boys’ pranks. A neighbour once had to encourage one of the young ladies telling her: “It’s okay, you can go, they are not so bad!” Françoise Houle who went to the school # 8 with Jean-Marie says that the Maisonneuve could really be a handful but that regardless they were loved and appreciated. They were popular in town, they had charisma, the ‘Maisonneuve appeal.’

Of the 5 boys, only Guy showed some interest in farming. In 1988 he purchased the farm with his spouse Danielle Boudreault. Together they continued to improve the herd and their land. The farm since 2003 was called: Ferme Guyelle. The following year, they installed an automatic withdrawal milking system to facilitate their work. One of their daughters moved to a farm in Ste Rose with her spouse while Miguel and his wife Joannie took over the ancestral farm in 2016. The farm was renamed Ferme Maisonneuve.

Faithful to his family heritage, Miguel motivated and hard working, in a few years triples the size of his cultivated land and buys more cows. He then needs to had a new milk parlor which is presently under construction. (Well waiting for the nicer weather to return). He is anxious for it to be finished but worried for the timing. He hopes to be able to do the seeding before he needs to cajole his cows in their new environment.

Many more stories will be lived and shared between these barn walls. For now Miguel’s children are too young to help, but it won’t be long before a new crew of little Maisonneuve will be running around on the farm. Until then, Miguel is happy to count on the help of his parents and some employees. His grandpa is also keeping a caring eye!